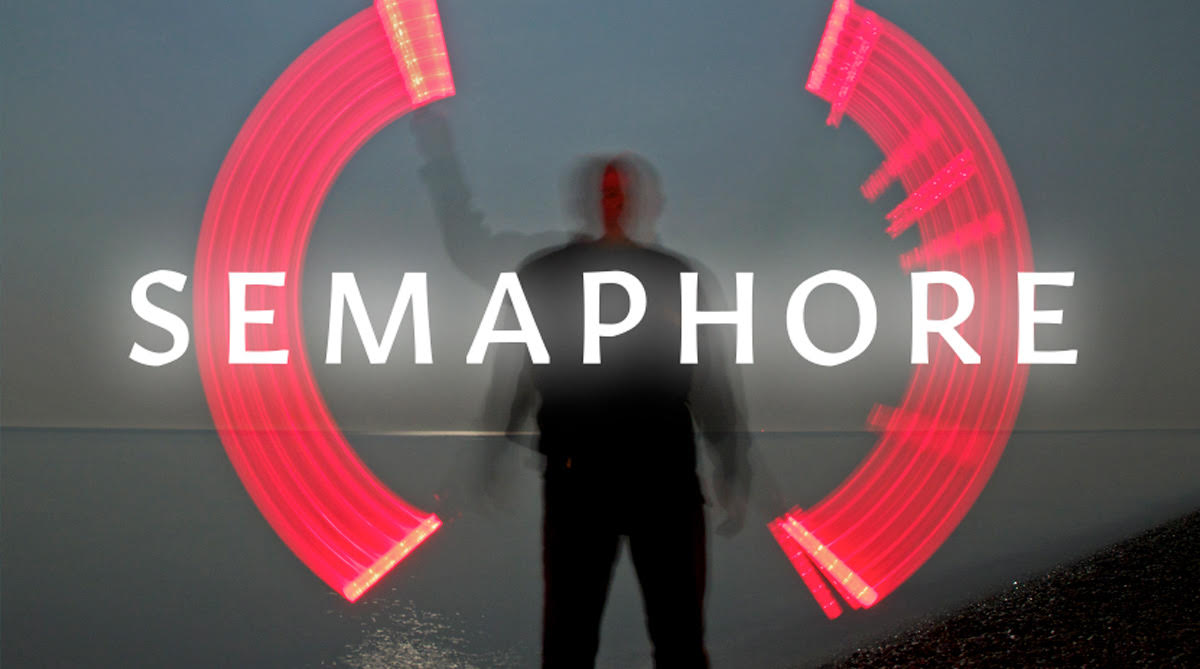 Hastings signals to Earth as it emerges from Lockdown

Hastings celebrated on 17 May last year, with its first live public event after the relaxation of lockdown. Part of The Sea Beneath project, Semaphore was a site-specific blend of sound, light, fire and performance – both live and digital – on Hastings beach. A sequence of seven choreographed performances wove together sound installation, film, spoken word theatre, clowning and fire as the production built towards a spectacular and moving ending. We have captured the event here.

Despite dramatic skies, the rain held off and almost 500 people came in person to enjoy the immersive mix of live performance, pre-recorded original music and film, streamed simultaneously to their mobile phones. Several hundred others watched it online, commenting in real time via Chat, and receiving text messages during the show with further information.

More than 30 talented local artists and performers worked together to create the show. Kevin Grist created a binaural or 3D-sound installation to accompany the setting sun. Christine Harmar-Brown’s script told a parable of Poseidon’s (ancient Greek god of the sea) fury at the damage done to his seas by humanity’s carelessness. Andrew Davies’ and Sophie Page Hall’s short film of the earth goddess Gaia against empty Sussex landscapes was projected onto gauze screens on the beach. Jane Bruce, Mary Hooper and Rebecca Child, of local Radiator Arts, created masks and costumes. Digital production and effects were delivered by Hastings-based SOS Productions and Margate company, PRICKIMAGE Video. Semaphore messages with flags and light batons were choreographed by Charlie Abrahams and performed by 14 young people from the White Rock Theatre Drama Group. Other professional performers (actors and musicians) took on the roles of the gods, mortals and satyrs. In all, close to a hundred people were involved with Semaphore in one way or another.

Semaphore made innovative use of digital technology to reach two audiences simultaneously: a socially distanced live audience spread along the beach and online audiences at home. Links to a live webinar and text messages were sent to the audience’s phones and computers. Hastings company, Technology Box, was commissioned to extend the seafront WiFi and performers were guided by radio. Because of lockdown, Semaphore was devised, prepared, rehearsed and delivered over Zoom. Only in the last week were performers able to rehearse live, under Covid limitations, complicated by severe weather.

Signals
To complete the Semaphore project, we have produced a new film called Signals using footage from the Semaphore event and new sequences from The Reckoning, written by Christine Harmar-Brown and filmed by Joe Morgan with actors Ben Watson (Dimitry) and Riz Maslen (Ismene) last September. The film is edited by Laura Coppin.

Signals is a binaural sound piece that plays with the application of Morse code. The narrative of the piece describes the consequences of the environmental crisis and explores ideas of the lack of human connection through the rise of social media and also since the pandemic. The Reckoning depicts the downfall of Ismene and Dimitry’s relationship as a symbol of climate change. The footage has been woven together to tell the story of Kevin’s piece. 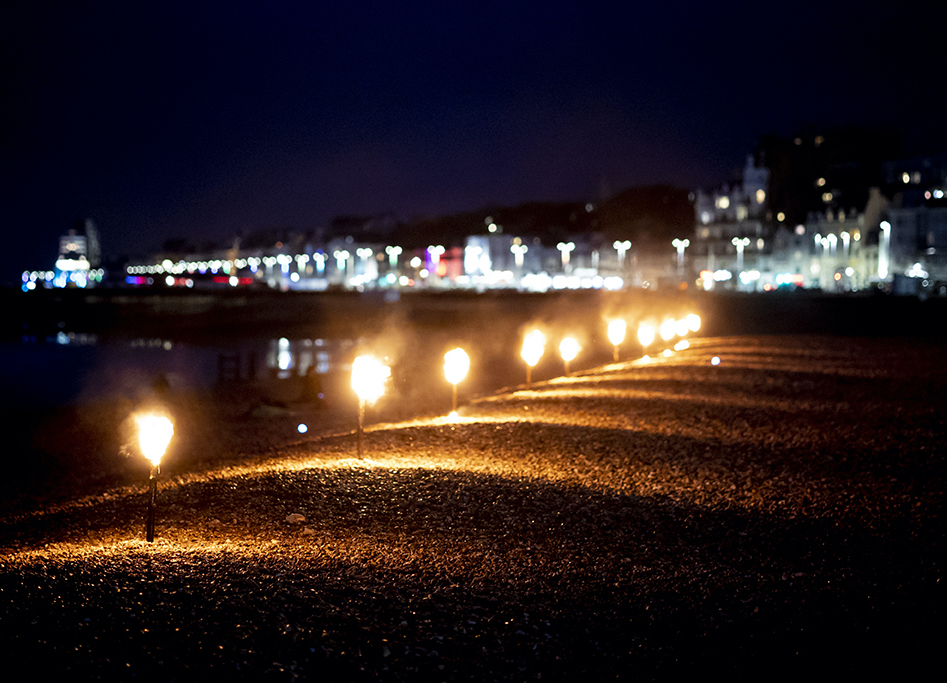 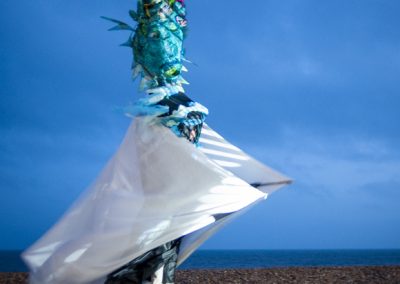 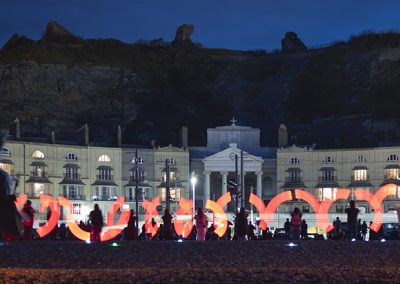 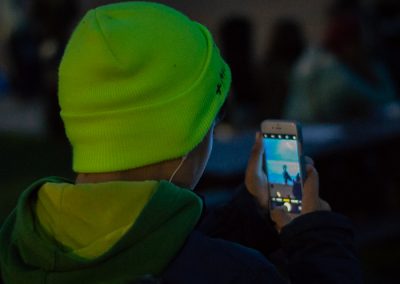 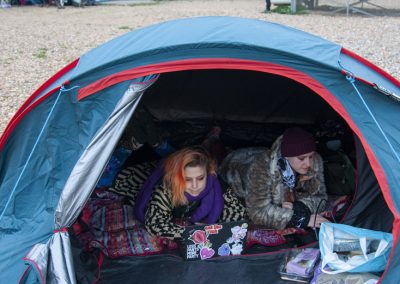 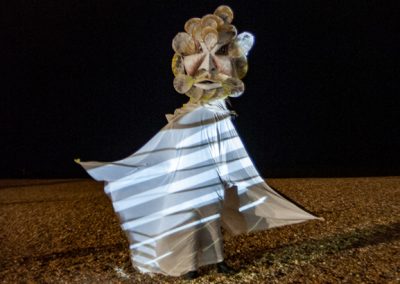 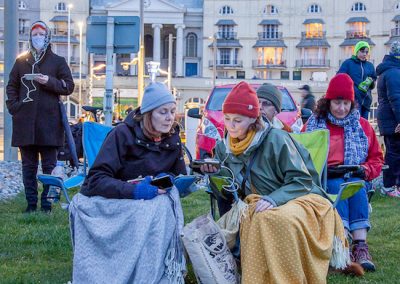 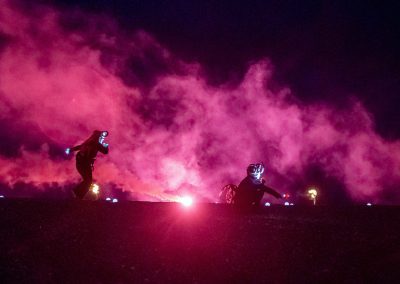 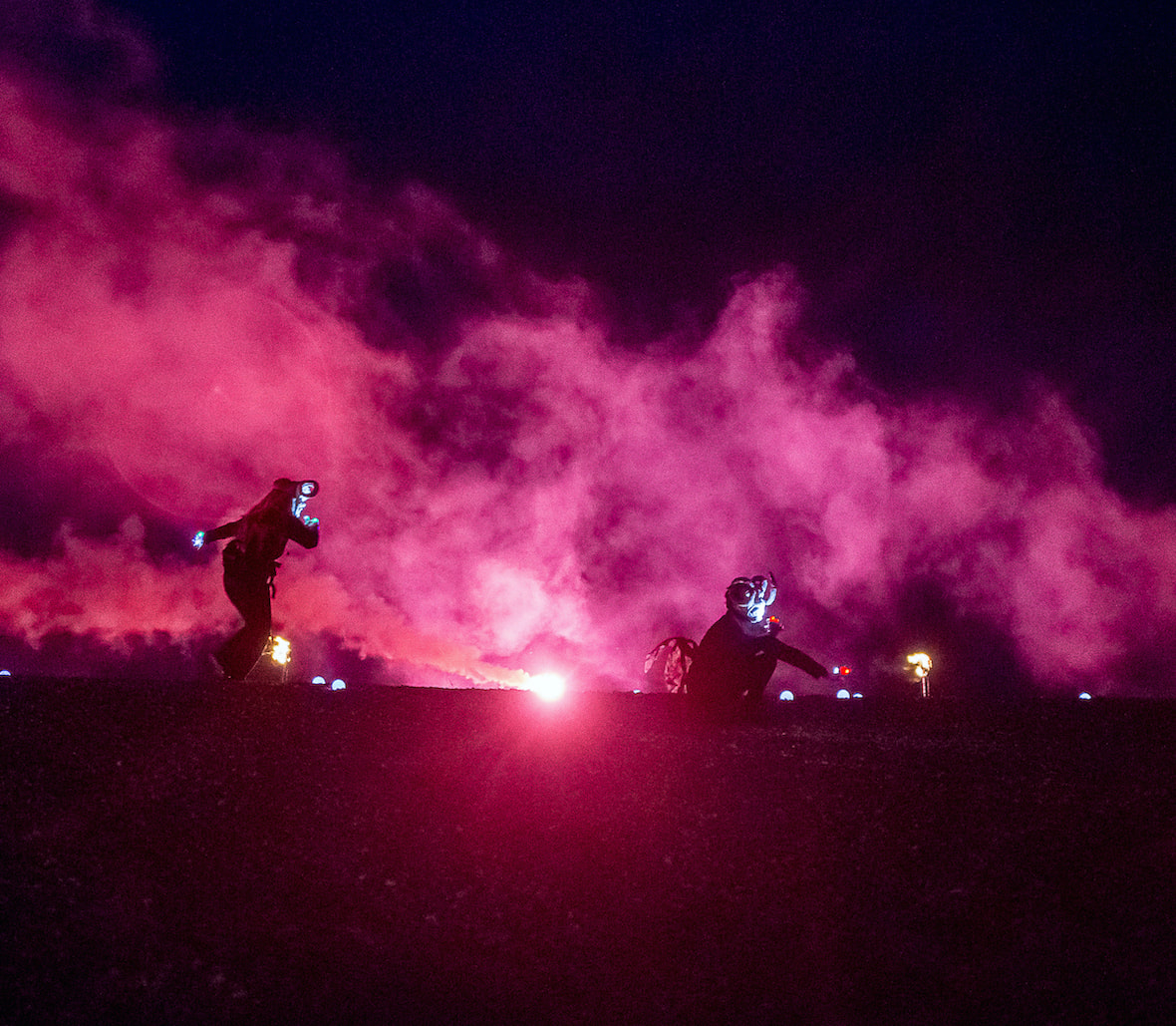 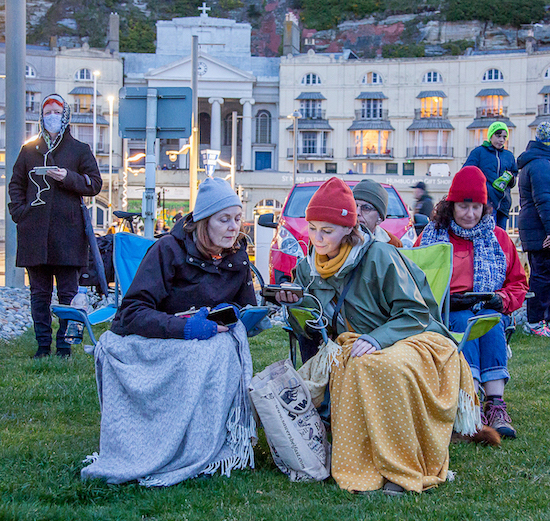 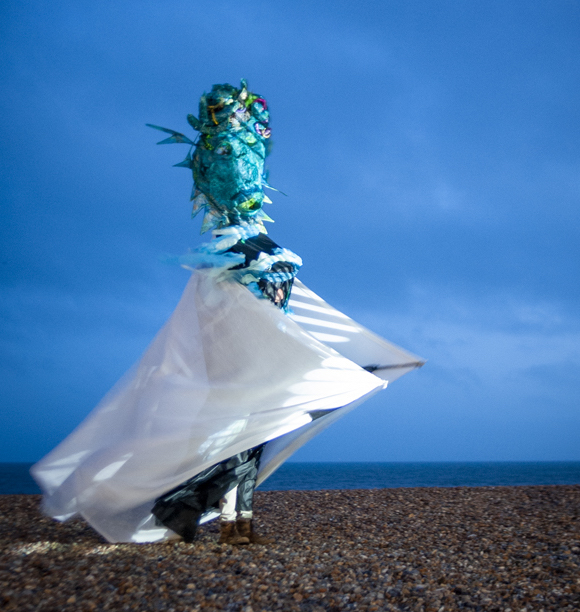 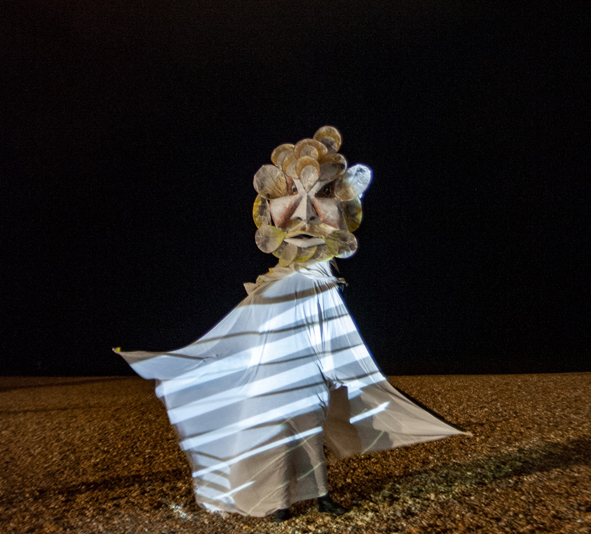 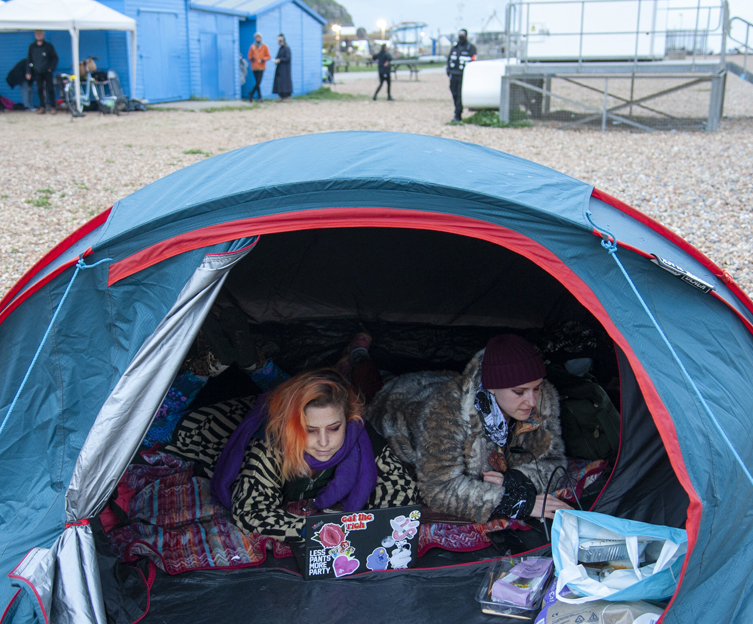 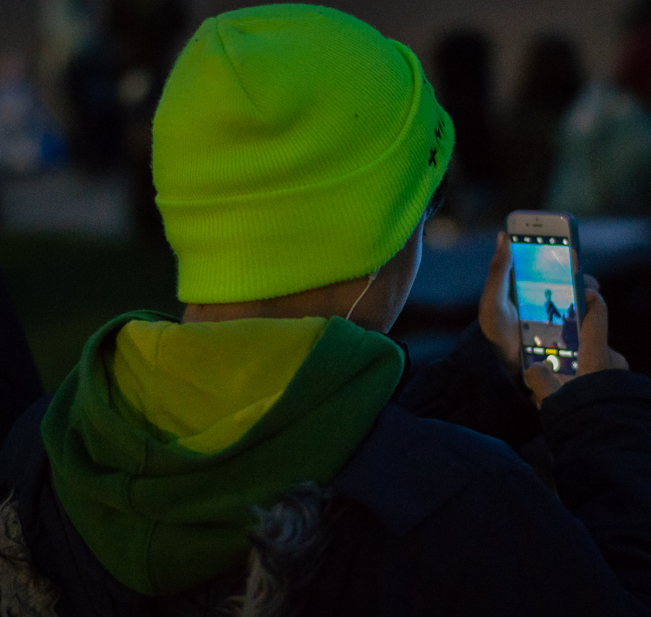 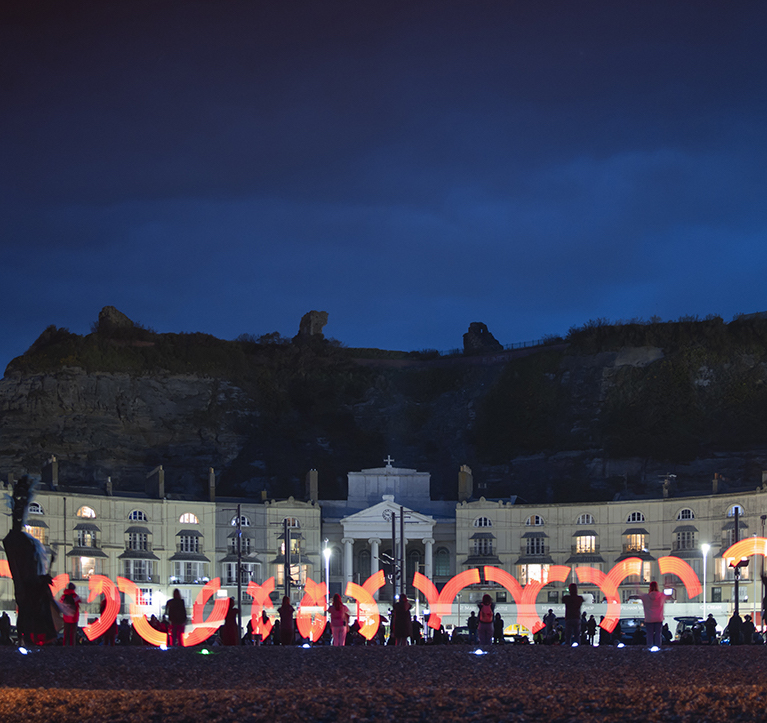 Hastings Calling
A highlight of Semaphore was Hastings Calling, where videoed messages from some of the 27 other Hastings around the world, including France, Nova Scotia, and Sierra Leone were embedded in the performance. These exchanges with other Hastings are part of the Hastings Calling project, within Semaphore, which is managed by Reece Shepherd, an MA student at the University of Brighton, who is interning with MSL. In Reece’s blog he reflects on the process of making communication links between the other Hastings in the world and us.

We have also produced a short film, Hastings to Hastings, of all the people that contributed to the project, asking them for their views on how climate change affected their lives.

Chris Wainwright
Semaphore was inspired by the work of the late Chris Wainwright, an internationally-respected Hastings photographer and environmentalist who, along with his partner, Anne Lydiat Wainwright, created a series of powerful light works entitled ‘What has to be done?’ on the shoreline of Aldeburgh, a few miles from Sizewell B nuclear power station in 2011. This was influenced by the work ‘What is to be done?’ by German artist Joseph Beuys. Both works explore the disastrous consequences of the planet and its inhabitants falling out of harmony.

Waving not Drowning!
Anne Lydiat Wainwright recently introduced the work the work she did with Wainwright for the Semaphore creative team. Part of this was based on a short essay which Chris wrote in 2013 in which he describes how his use of semaphore links with his concerns about climate change and nuclear power. We have reproduced it here.

“In the technological age of the 21st century there is little, if any, significant use of semaphore as a means of communication and only a small fraction of the population is able to understand it. It is a system based on the use of flags, light wands or simply bare arms held out in a series of positions to represent letters of the alphabet and numbers. If, however, our complex technologically reliant communications systems were to fail or be rendered inoperative due to loss of power, as the result of catastrophic environmental disasters such as floods, earthquakes, acts of terrorism, technical malfunction, hacking etc, then semaphore would be our only non-technologically dependent form of visual communication.

My body of work ‘A Catalogue of Errors’ uses this communication system and in particular the sign for ‘Error’ which is sometimes also called ‘Attention’. Since 2008 I have created ‘Error’ signals in a number of locations that have geographical and political significance or are focal points of environmental sensitivity and trauma. The work falls into three sections.

The first section is the Arctic Region where I have witnessed the dramatic effects of climate change, easily observed and seen clearly to be escalating at an alarming and potentially irreversible rate. The Arctic remains the key indicator of the global condition of our climate, a living testimony to our errors, possibly since the time of the industrial revolution.

The second section is Japan and in particular the Tõhoku Region that I visited prior to and after the Great Eastern Japan Earthquake and Tsunami of 2011. Here, as well as the devastation in towns such as Minamisanriku, Ishinomaki and Kesennuma, and subsequent loss of life caused by the power and scale of the earthquake, there is an ongoing anxiety and environmental concern over the safety of the damaged Fukushima Daiichi nuclear power plant and the implications for a displaced population, increasingly isolated and stigmatised.

The works in the third section are from the UK and are linked to the Arctic and Japanese work in that they also focus on the nuclear presence and coastal areas where the threats of coastal erosion and sea level rises are becoming more probable and dramatic due to climate change. A key work from this series is ‘What Has To Be Done?’, a performance light piece made in 2011 on the shoreline at Aldeburgh, a few miles from Sizewell Nuclear Power Station on the Suffolk coast. It was made in response to an earlier work by the German artist Joseph Beuys in 1980 called ‘What Is To Be Done?’ commissioned by The Demarco Gallery in Edinburgh as a series of interventions and debates about the relationship between nuclear power and alternative technology.

In the intervening 33 years the debate about energy supply options, carbon emissions and resource extraction has continued to come in and out of focus and has gathered momentum, but little has changed to quell the overall desire for increasing levels of energy and power consumption. Our planet is under ever-increasing pressure to support ‘civilised’ lifestyles largely based on an energy greedy and exploitative attitude to the natural world and a determination to measure its wealth and improvement by a process of out-of-control consumerist acquisition, leading to a potentially fatal depletion of the world’s most valuable natural resources.

History reminds us of our catalogue of errors – how will our future errors be seen?” 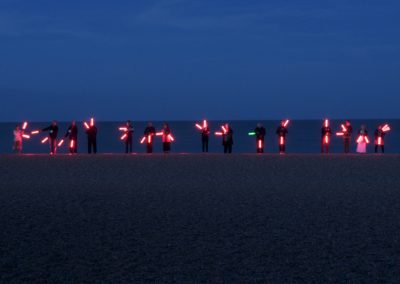 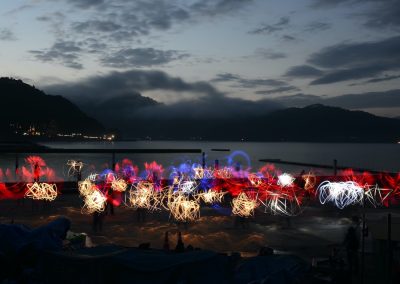 ‘We are all stars’ at Kamaishi in Japan 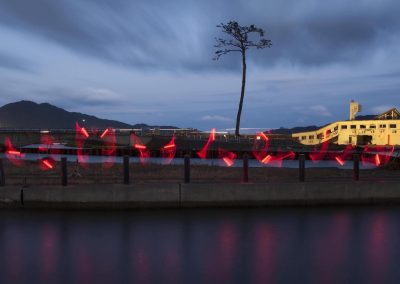 ‘Survive’ at Rikuzentakata in Japan 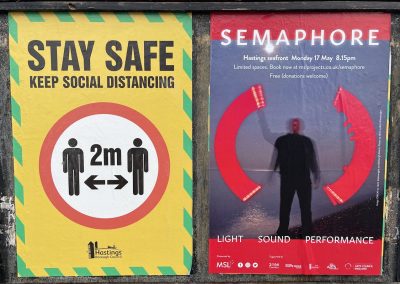 All photos by Anne Lydiat Wainwright 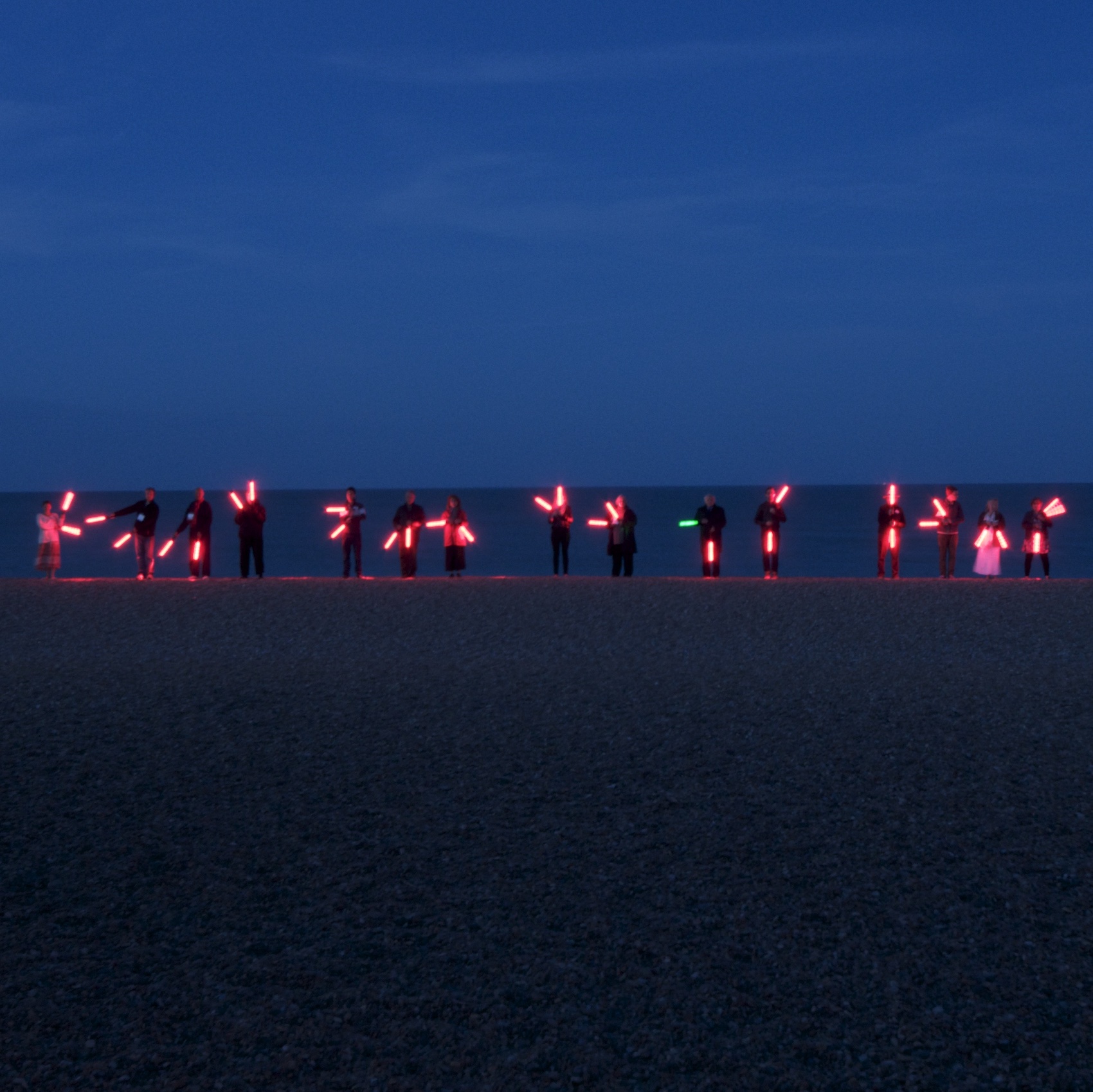 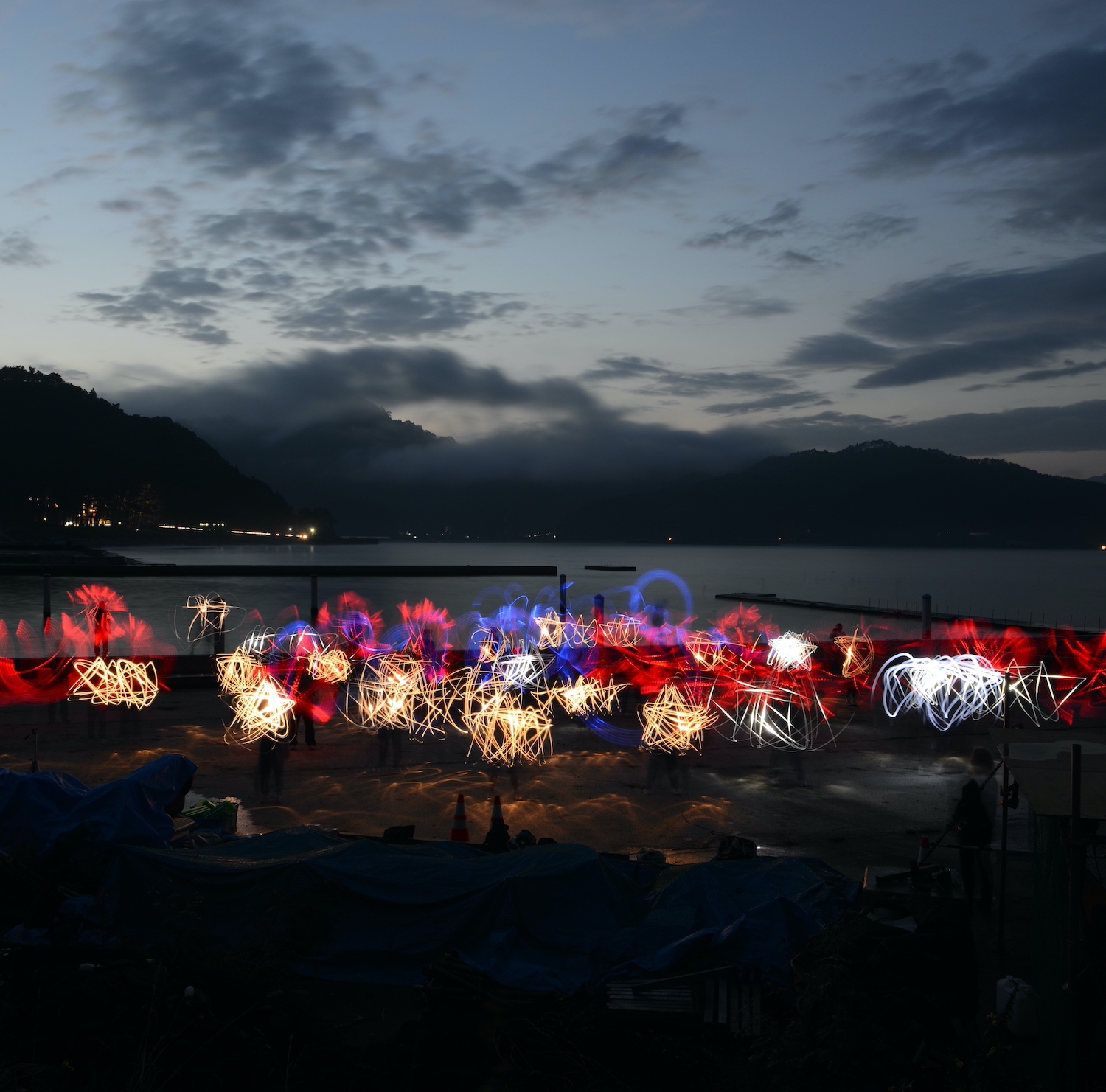 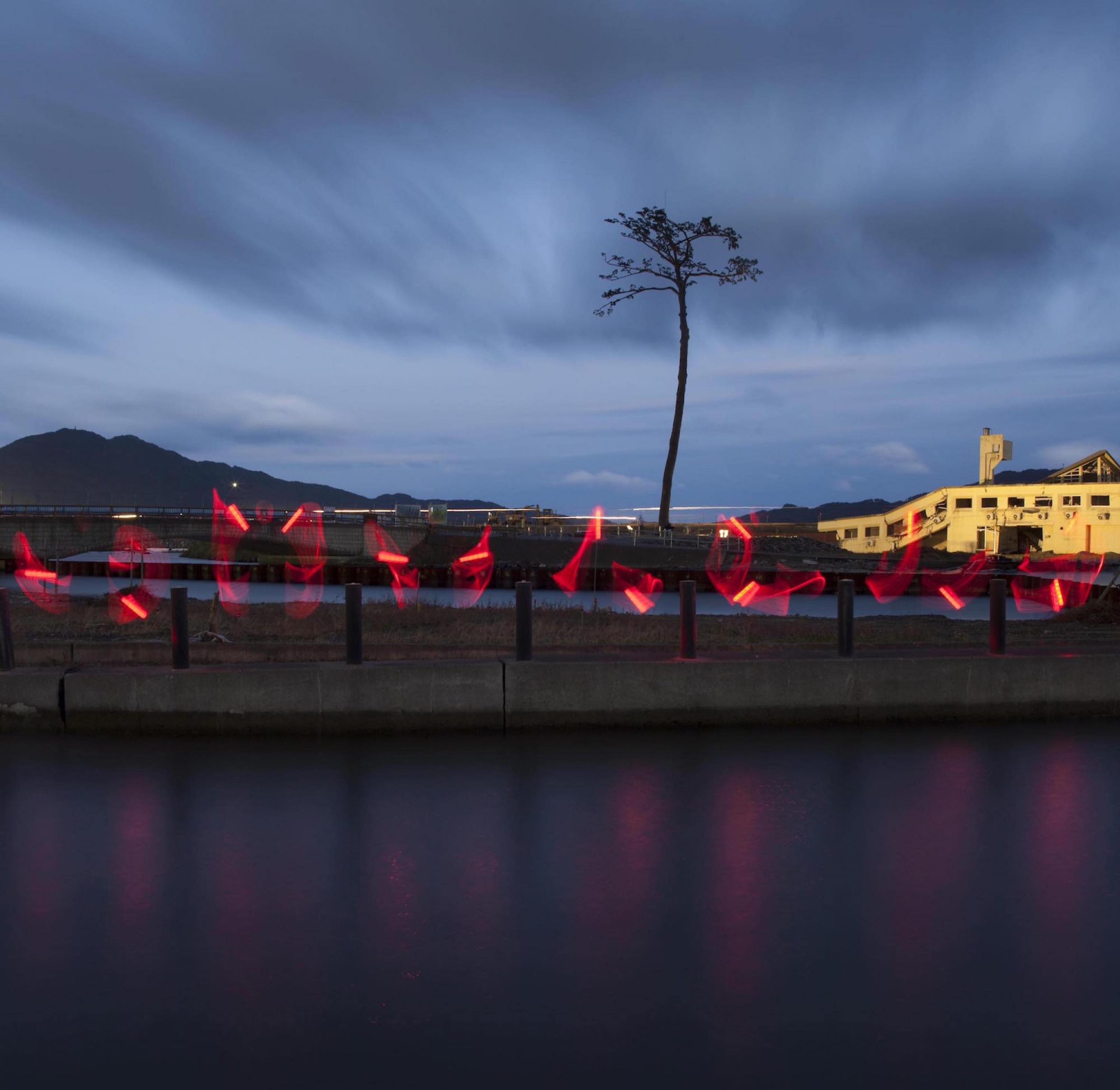 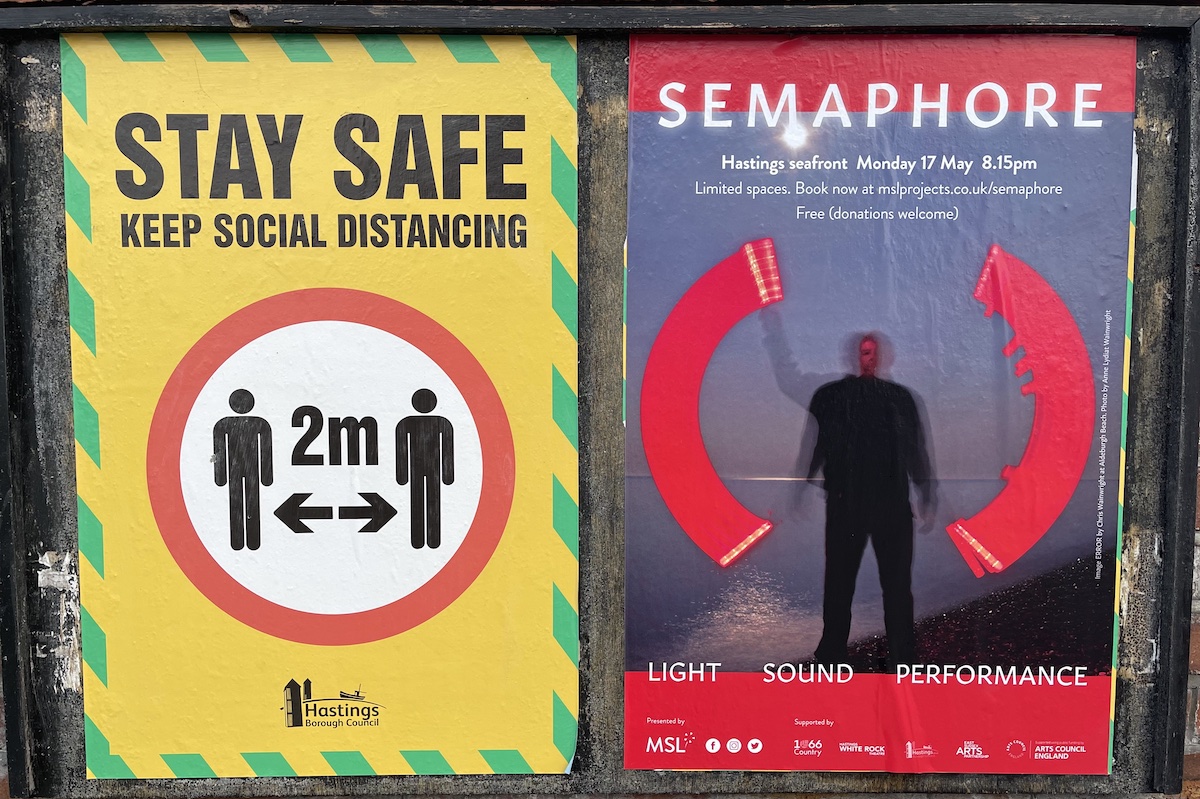